Would you like to switch to the accessible version of this site?

Don't need the accessible version of this site?

“Get knowledge of the spine, for this is the requisite for many diseases.” These words are attributed to Hippocrates, known as the Father of Medicine among Western cultures. Although Hippocrates lived from 460–370 B.C. in Greece, this underlying philosophy carries through to modern chiropractic care.

Health care practices that focus on the spine did not start with Hippocrates. The ancient origins of chiropractic care are evidenced in medical texts dating to around 2700 B.C. and 1500 B.C. in China and Greece. These texts detail spinal manipulation and are among some of the earliest writings in recorded history.

In fact, “bone setting” is linked to the development of both chiropractic care and osteopathy. This holistic practice is one of the five traditional Chinese medicine treatments, and those who practiced it were known as “bone setters.” A medical text known as the Edwin Smith papyrus of 1552 B.C. provides evidence that bone setting was a practice in Ancient Egypt as well.

The philosophy behind bone setting is that injuries in the skeletal frame need to be set straight in order to return the body to its natural order so it can heal properly. This practice extended well into the 18th century in Great Britain with families who passed the healing art from one generation to the next. However, as medicine modernized, bone setters struggled to be awarded the same status as medical physicians.

The ancient philosophical roots of chiropractic suggest that disturbances in the body’s natural order contribute to disease. What separates chiropractic care from standard medical solutions to disease is that chiropractors retain the foundational idea that the body is self-sufficient. Therefore, it is believed that if the body is restored to its optimal state, it can begin to heal itself without unnatural medical interventions.

Chiropractic offers natural solutions to recurring problems that are a result of environmental stress or injuries. This outlook stands in contrast to standard medical care solutions that turn to pain-relieving drugs or invasive surgeries.

The Foundation of Modern Chiropractic Care 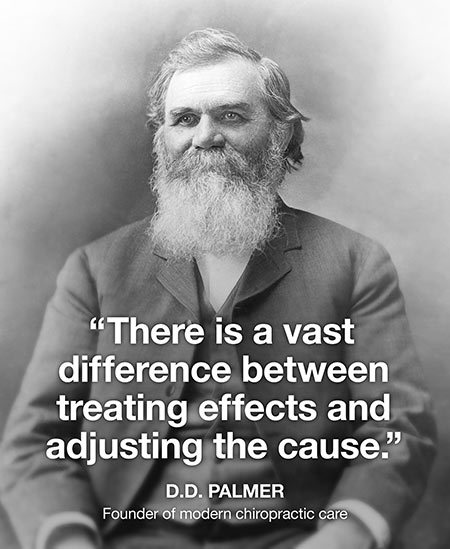 It wasn’t until 1895 that the term “chiropractic” arrived in circulation among public and medical communities. It’s derived from the Greek words cheir (hand) and praktos (done), or “done by hand.” Daniel David Palmer, the founder of chiropractic care in North America, coined the term and is also credited with developing the healing art’s first solution to an ailment in modern times.

D.D. Palmer believed that the body had a natural ability to heal itself and that some conditions were the result of a lack of or disorder in nerve supply to the affected region. Palmer advanced the idea of spinal misalignment, or “subluxation,” and devised a modern procedure for a spinal adjustment. He performed an adjustment on a partially deaf patient in 1895 and was lauded for having lessened the severity of the man’s deafness.

From Shaky Ground to a Secure Future

From the 1960s until around 1980, the American Medical Association (AMA) disparaged the chiropractic profession, claiming it was unscientific. It took a federal antitrust court decision in 1987 to overturn an AMA effort to contain and eliminate the practice of chiropractic. But as chiropractic care gained in popularity among patients who experienced positive results, this controversy gave way to a new era of collaboration between chiropractors and standard medical practitioners.

As chiropractic schools have continued to spring up around the world with a core curriculum as rigorous as that of standard medical schools, chiropractic practitioners have continued to adopt diverse approaches to caring for disorders of the spine and muscles—without invasive surgery or potentially addicting medications. The past several decades have seen a growth in communication and collaborative research efforts between chiropractors and medical doctors, and chiropractic has been accepted in the medical community and recognized by several international guidelines as a beneficial treatment for many musculoskeletal conditions. VA hospitals and other medical facilities have started to incorporate chiropractors as part of their health care team. Research studies continue to underscore the safety and effectiveness of chiropractic treatment for a variety of disorders, and the chiropractic profession is recognized today as a valid first-line treatment option for many health conditions.